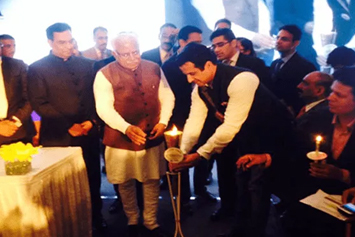 SACC made its National footprint with the launch of Startup Torch by honorable Chief Minister of Haryana Mr. Manohar Lal Khattar at Gurgaon. SACC President Mr. Manipal Dhariwal handed over the lit-up torch to the honourable Chief Minister.

SACC partnered with Haryana Government for their major program Happening Haryana (Global Investors Summit 2016) held at Gurgaon in March 2016. The torch went to around 25+ educational institutes of Haryana where SACC conducted Startup Bootcamps before the Startup Weekend Haryana finals in March.

Startup Weekend Women witnessed a tremendous turnout, primarily from the students of Kurukshetra University and National Institute of Technology. The major aim of the event was focused on the interest of women, empowering and uplifting the womenfolk of the state of Haryana. Amongst the huge spread unrest, violence and agitations across Haryana, it could not deter these women from showcasing their talent in the startup weekend Kurukshetra. Filled with unmatched enthusiasm and energy, the turn-up and response was an overwhelming one.

Startup Weekend, Gurgaon(4th -6th March 2016) held under the aegis of ‘Happening Haryana’ and Startup Acceleration Chamber of Commerce(SACC), turned out to be a life-changing event for many. One of the highlights, being the enormous student participation, from every nook and cranny of the State of Haryana. Rohtak, Sirsa, Kurukshetra, Sonipat, Panipat, Hissar, are a handful amongst many cities. The environment throughout the event was insistent and competitive, owing to the large proportion of the participants coming from top-notch colleges. The presentations by these great young minds of the country were truly innovative and futuristic. Moreover, the level of vigor, confidence and groundbreaking ideas among the participants amazed even the jury members. There was a new ray of hope among the youth of Haryana to get mentored and get technology and financial support to build sustaining and employment generating Startups. 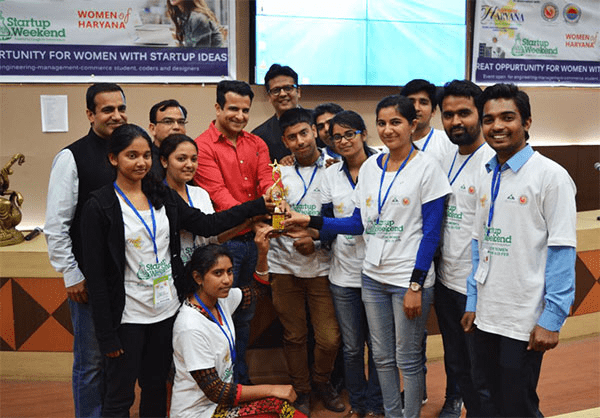 Happening Haryana Global Investors Summit 2016 Startup Weekend Finals:
The Honourable Chief Minister Sh. Manohar Lal Khattar ji chaired the Startup session and encouraged the youth, as he announced financial support for all 6 winning teams. He guided the youth on being honest and remain dedicated to the goal. Sh. Ram Bilas Sharma (education Minister) Haryana announced financial support for all 10 participating teams, he also suggested to the youth to have one plan and one mission and remain focused. Capt. Abhimanyu (honourable Industry and Finance Minister-Govt of Haryana gave an inspirational talk to the students and welcomed them to avail the opportunities with the government). SACC and NASSCOM announced space and co-working space at their incubation centers. All teams will be supported in building their MVP and prototypes by all stakeholders.

The program which started with the welcome address by Sh. Vijai Vardhan ji (ACS-Higher education Haryana) witnessed participants from over 20 academic institutions from Haryana. Sh Manipal Dhariwal, President SACC showcased a special video recap of Bootcamps in Haryana. Sh D Suresh- Commissioner Gurgaon coordinated the thanks note and acknowledged the delegates and organizers. Some of the noted dignitaries present at the finals were:

The Jury at the Finals was: